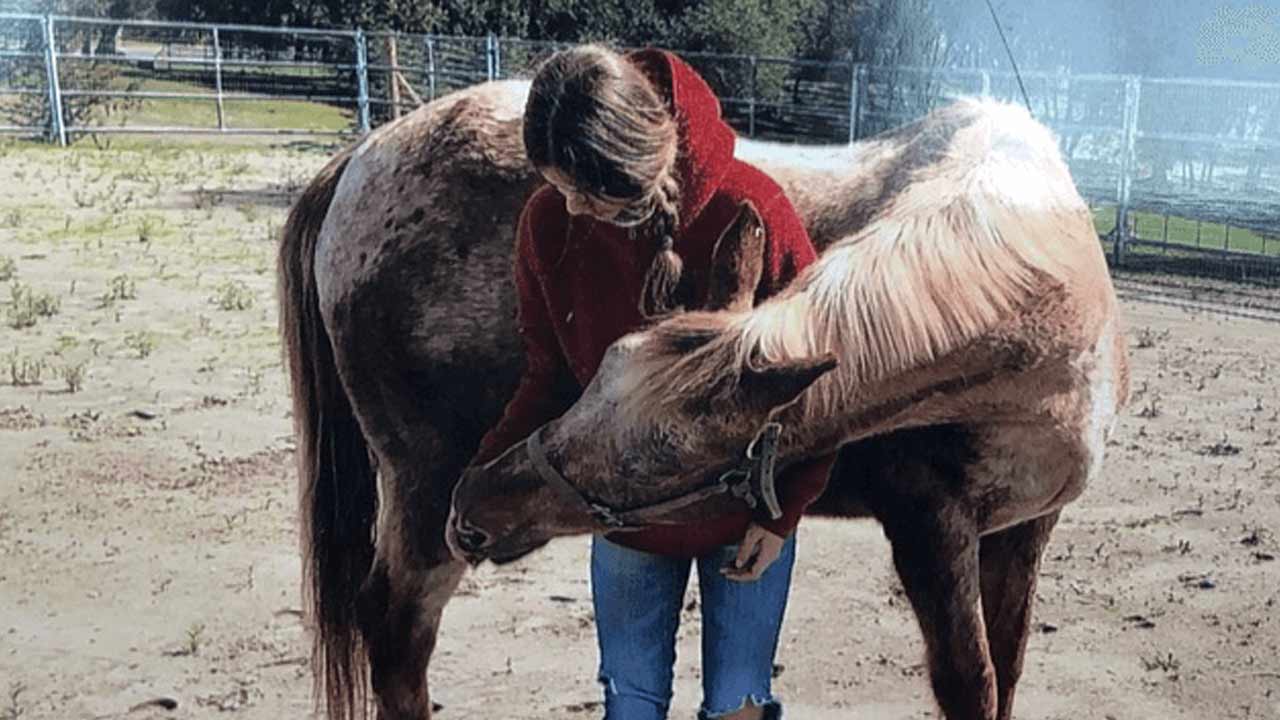 We would like to introduce you to Jada, our guest blogger this week! Jada is a horse crazy girl who has known since the time she could walk she was forever going to have horses in her life in some way, shape or form 😊 Jada is soon to be a Junior in high school now & owns her own horse, an Appaloosa gelding, with whom she has formed an unbreakable bond. Within the last year, Jada found out her gelding had developed Ringbone, a degree of arthritis. In her urgent search for treatment to help her horse feel better, Jada came across Photonic Health red light therapy. Jada has since used the Photonic Health Standard Red Light on her gelding & was even given the opportunity to conduct a research experiment on her treatment. We want to present to you Jada’s blog, written specially for us, on her findings of this experiment & how her beloved gelding is doing today. 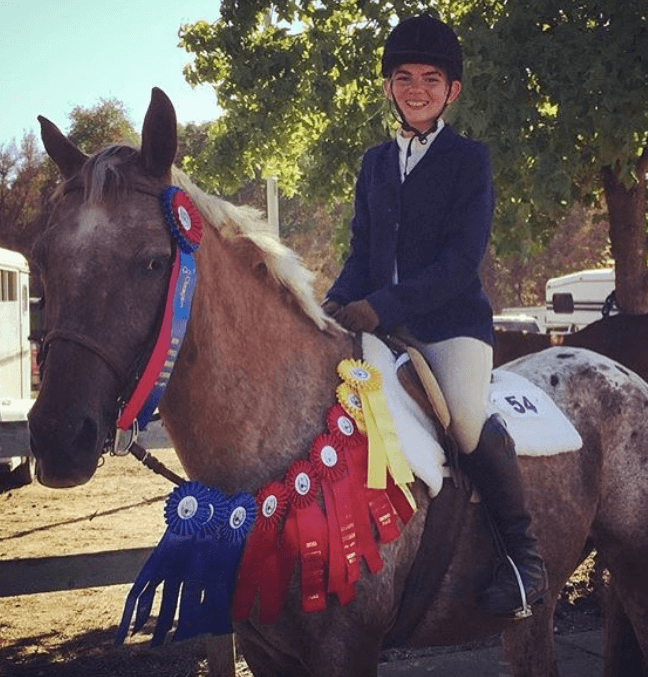 I have known ever since I was little that I was born to be an equestrian. Whether it be paying the five dollars at fairs to go on the pony rides, making every school presentation related to horses, or skipping playdates after school to go on a trail ride, I knew from a young age that my passion existed within the equine industry. As I have grown, I have developed an unbelievable bond with my Appaloosa gelding. We have competed in the All Around circuit, participated in Pony Club, 4H, poker rides, but most importantly have spent countless hours together lounging around in the field. Thus, it is no surprise that when he was diagnosed with Ringbone I began to panic.

Ringbone is a degree of arthritis where inflammation between joints begins to create a fusion of new bone, often resulting in spur-like particles. When the vets told us that we could no longer ride, that was not what scared me. What scared me was not knowing if my horse was comfortable enough. While researching through my equine books gathering knowledge about Ringbone, as well as how to treat it, I came across a brochure which I had picked up from the Western States Horse Expo of summer 2018; a brochure from Photonic Health LLC. I remembered how fascinated I was with this technology as well as how it could treat a variety of medical issues. I began researching on their website if there was any clinical report on laser therapy usage on Ringbone, but could not find one. Ironically enough, my biology teacher contacted me around that same time asking if I would be interested in designing an agriscience research project within plant, food, or animal systems. This, she said, would involve conducting an experiment, portraying it on both a presentation board & research paper, & traveling with it around the state to various field days. Although this may sound complex, I automatically jumped for the opportunity, as it would allow me to conduct my own experiment about how laser therapy can treat equine arthritic cases such as Ringbone &, hopefully, help cure my own gelding.

After deciding to design an experiment, I contacted the Photonic Health company, asking if they could loan me one of their company’s laser lights for less than a month in exchange for an additional clinical report for reviews/feedback. To be honest, I had no clue what the response would be, I mean, how many companies are brave enough to loan a three hundred dollar product to a Sophomore in high school? However, they responded immediately with the generous offer to send me the Photonic Health Standard Light with the power of 660 nm (nanometers) right away so that I could begin my experiment. Now, I previously had already been icing, massaging, along with resting my horse for additional comfort before the light arrived. These techniques did decrease the formation of the “ring” that the Ringbone forms around the joints (hence its name), so now my main focus with the demo was to analyze how fast a horse could improve from arthritic conditions when treated with LLLT (low-level laser therapy). Usually, horses with arthritis will show changes in their flexibility, stamina in performance, as well as behavior.

Using these as my subjects while testing, I conducted the hypothesis:

If I place Photonic Health’s Standard Light with the strength of 660 nm for seven seconds on each acupoint across dorsi muscles, as well as locomotive joints, in the course of 8 days, then the length of stretching ability will increase by at least three inches, the length of duration at the trot will improve at least 45 seconds, as well as behavior during sessions will show a relaxed expression.

The dorsi muscles refer to top line structure which exists within the ​Bladder (Bl) meridian. Locomotive joints refer to areas such as the hocks, knees, fetlocks, etc. that allow the horse to travel. In order to test flexibility, I analyzed the length, in inches, that my horse could gain by stretching after each session with exposure to the laser. Stretches involving the front legs include the Shoulder flexor which targets the Lateral Head of Triceps muscle & the Common Digital Extensor tendon. As for the hind legs, the hip flexor & stifle flexor stretches targeted the Lateral Vastus muscle, Gastrocnemius muscle, & the Lateral Digital Extensor tendon. As for stamina, I decided to use the trot to measure & analyze how he traveled. This is primarily because the trot is a two beat lateral gait, therefore it is easy to test consistency as well as hoof placement. Finally, I based the behavior unit off of the average characteristics of horses who identify as being either stressed, mediocre, or relaxed. These signs include taking notes on the ear positioning, sclera content of the eyes, along with stiffness felt within the muscles. Now, the tricky thing about these categories is how easily they can be influenced. For example, weather can alter horses physically & mentally with changes in atmospheric pressures. Nutrition is another example, such as the lack or deficiency of a certain nutrient can mitigate the physical ability of an equine. Because the experiment was to last an approximate eight days (with four of them involving the procedure & the other four being rest days), I had to study the forecast to figure which week of the month would be the most consistent, weather-wise. I also had to take into account the diet I was feeding; this included timing how long he was nibbling on grass, what supplements he consumed, & what time he was fed. This began about a week prior to the experiment to set up consistency & accuracy, & continued through the eight day procedure as well.

Now that the dates were set, his diet was monitored, & the light had arrived, it was time to begin the experiment! The first day that I used Photonic Health’s Standard Light, I started on his front legs, worked along his topline, then concluded with his hind legs. I will never forget that moment when I reached his back & he automatically closed his eyes, took a deep breath, & began to relax. I was completely bewildered on just how therapeutic the Standard Light truly turned out to be, especially on my own horse! Testing behavior first, I analyzed how he appeared; beginning to come off as very cautious before the light touched him, I graded him a 2 on a five point scale (with 1 being the poorest quality & 5 being most ideal). However, because he realized that the laser brought pain relief, the procedures after showed tremendous improvement. Right after analyzing his behavior, I tested his flexibility with the extensor stretches. He immediately showed signs of improvement as he extended his leg to a further reach than previously, however, his muscles began to contract again after a few seconds. Based on this, I ranked him a 3 out of 5. Although this does not appear to be desirable, looking at the variation between the documents from before the procedure versus immediately after the light exposure proved to be an improvement. Finally, his stamina was tested. The most noticeable factor from here was how I needed minimal cues for him to pick up the trot, as he was very eager to move around. The only thing that I would have liked to see more of was his extension in his stride, thus, I graded him a 3. The next procedure most definitely portrayed evidence of improvement, especially in behavior. Having started at a 2 during the last treatment, he now stood at a 4, appearing more curious & relaxed as opposed to cautious. Flexibility also increased on the scale, rising from a 3 to a 4. Now he was able to hold his stretching position, but only took a little longer than usual to fully extend. Stamina appeared to remain the same as the first day of treatment, as he was excellent at picking up gait, but appeared stiff in his extension. The 3rd day showed the same ranking as Day 2 in the behavior category, however I saw an improvement in his flexibility & stamina. I was extremely proud to rank him the ideal 5 on the scale for flexibility, as he could extend his leg closer to the three inch goal with no contraction. As for his stamina he appeared to have a greater extension in his stride, with only moderate “choppiness” at the walk (which could possibly be from excitement). He also appeared to rise in his length of duration, coming closer to the ideal 45 seconds of a consistent trot with both extension & speed. The final day of the experiment was possibly the most remarkable, with rankings of fives in all three of the categories. His behavior showed calm relaxation, his flexibility reached the three inch goal from the hypothesis, & his stamina portrayed an overall athletic performance with increasing seconds of consistency. Therefore, my hypothesis was proven correct.

There are primarily two factors that I am grateful for from this experiment:

2) the chance to not only explore, but as well as conduct my very own experiment on equine health!

This experiment not only taught me more about the relationship between laser lights & cells, but also gave me a better idea about what it is that I want to do career-wise. Earlier I mentioned how I have always known that my passion exists within the equine industry, But I have never known exactly where. It started with wanted to compete in showjumping at the Olympics, then it was winning a World Champion title, now I know that it lies in the field of equine health. Quite honestly, I can’t believe that I didn’t see it earlier, as I love using liniments & massage techniques to provide additional comfort for my gelding, & I think that the pure joy I got out of seeing my beloved boy benefit from this therapy is to blame for my growing fascination with equine health. Being able to bring joy like that to fellow equestrians by treating their horse, & of course seeing my own gelding enjoy it as well, seems like the absolute perfect occupation. Additionally, this experiment’s goal was not only to see how well a horse could improve from arthritic conditions in a short period of time, but it was also to promote awareness about LLLT. There are several health-related issues not only for equines, but as well for other species that have no official cure. Because laser therapy is still fairly new, not many people are aware of its benefits & its diversity of injuries that it can cure. I hope that my presentation board & research paper traveling to various field days around the state will help advertise the use of laser technology for happier owners, & healthier pets. 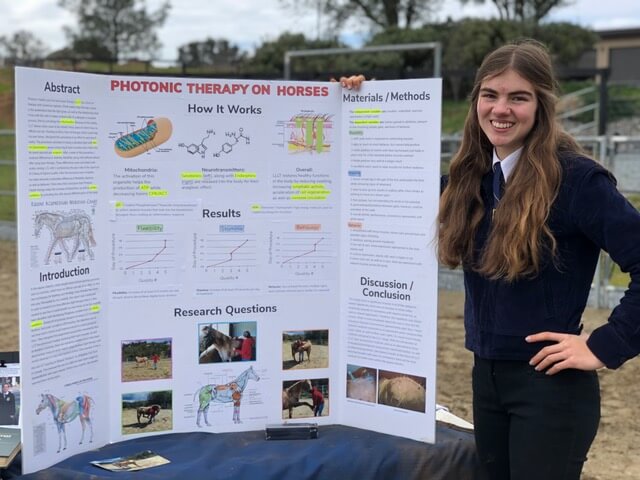 Thank you, Jada, for your support of Photonic Health red light therapy, sharing your project with us & the dedication you have to helping horses! We can’t wait to see how you take your project to the next level in your Senior year!

Plus! Free or Flat rate shipping on all hand-held lights and/or light kit orders